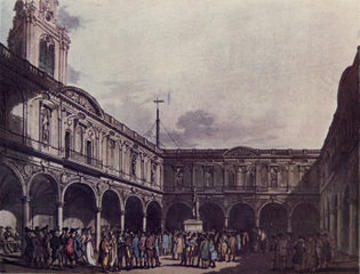 This case study examines the European-wide ‘fiscal-military system’ in the transition to modernity from the perspective of London, as one of the major hubs in that system.  Most studies of early modern British and European state formation, based on landmark works such as The Sinews of Power in 1989 by John Brewer, see this process as an internal one, driven by the need of states to mobilise their national resources through sophisticated systems of revenue, public finance and military and naval infrastructure.  This study argues instead for the disproportionate importance of the foreign money, manpower and materiel obtained through London for European state-building projects in this era in general, and for the British state-building project in particular.  It focuses on the role of the city as a market for British and European states between 1660 and 1870 and as a centre for military finance, logistics and recruitment, and the structures and networks that made it possible.  At the heart of this case study are several new datasets, providing for the first time a comprehensive and detailed overview of foreign troops in British service and the foreign money invested in British public debt between 1600 and 1870, which made up about 10 to 20 per cent of British military and financial capacity during this period.

Assured of easily raising large foreign loans and remitting the proceeds to Europe to fund foreign troops in British pay, successive British ministries up to 1795 depended on maintaining a skeleton force and defensive subsidies in peacetime and mobilising rapidly in wartime by hiring troops and buying allies ‘off the shelf’ as necessary.  It became, in other words, a state that was able to ‘surge’ its fiscal-military capacity.  This not only supported the ‘soldier trade’ and the wider European market in military manpower, but also had significant effects on the British state itself.  Foreign troops had to be paid and victualled more reliably than British troops, so that they could be hired again in the future, and foreign investors were immune from the informal pressures placed on British investors, so the British state had to become a credible borrower, and deal sensitively with the commercial and financial networks in London which made this possible.  Many of the key outcomes identified by the scholarship on British state formation were therefore actually the result of this hitherto un-quantified, under-appreciated and over-looked importance of London not just as a national centre but as a hub in, and conduit to, the wider early modern European fiscal-military system.  The case study argues that this relationship between London and the fiscal-military system then evolved after 1795 as Britain shifted from being a consumer of fiscal-military resources to a supplier.

Thus, whereas much recent work on the British state has emphasised its regional diversity, and the connections its peripheries maintained with Europe, this study examines the other end of the spectrum and the position of London within the process as a gateway to European finance and military manpower.